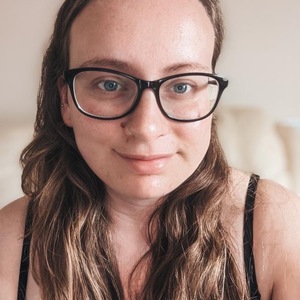 Honestly, when I tell people I filmed my birth I get a mixture of responses. Some people are amazed and mention how they wish they did too and some are grossed out and think it's disgusting. You also get the people who are intrigued to see but wouldn't go as far as actually looking.

Even before I was pregnant, I knew I wanted to film it. You see these documentaries of births on the TV and think how lucky they are that they get to see that again or getting to witness the bits they miss, such as the head crowning.

I had a birth plan but it didn't go according to plan. They always say "don't hold out hope because anything could happen" and I'm glad I didn't because it is not what I wanted. I wanted a water birth. I have Fibromyalgia and the increased pain scared me. I'd always heard that water births were a great natural pain relief and were relaxing so that is what I wanted. I also said "I do not want an epidural under any circumstances", well that also definitely went out of the window! I ended up with Gestational Diabetes quite late into my pregnancy and they said that sadly a water birth wasn't an option. I then had to get induced for reduced movements too.

As soon as I was moved to the labour ward, I said to all the staff that I want this to be filmed. They were happy to do this and said it was nice. It seemed kind of odd to me that more people didn't ask for this. I think it's the most beautiful moment witnessing your child you have carried entering into the world. If I hadn't have filmed it, I wouldn't have been able to see the moment her head crowned,  I would have missed how fast she decided to come out with that final push, I would have missed the look on my partners face, the happiness, love, and definite fear that was in his eyes. I would have missed the pride that was on my mums face. I also would have missed my overwhelming feelings.

Truth be told, I was so high from the gas and air, I laughed and cried simultaneously when she came out. I remember the surge of adrenaline and that love bubble but I honestly can't remember much else. So being able to go back and watch all of that is just incredible. It also included the first latch that she took as she latched on very quickly after birth and done the breast crawl.

I'm sure it's not for everyone and of course that is okay, but I always think try everything once. You can always delete it I suppose. I am so glad I have that memory that I can cherish forever, and if my daughter wants to see it I will be more than happy to share that moment with her. Birth is one of the most natural things in the world and without it we wouldn't exist. So to be able to witness something that beautiful over and over, and get that warm fuzzy feeling even now 18 months on is truly indescribable.

Being Pregnant During the Pandemic

Hi, my name is Emily! I am a first time mum to my daughter Nova. I work with children at my local hospital. I am a breastfeeding mum but am a strong believer in informed and supported is best. I love to share my journey through motherhood and hope my posts relate with others.

Waiting for Baby: How To Spend Your Last Week of Pregnancy