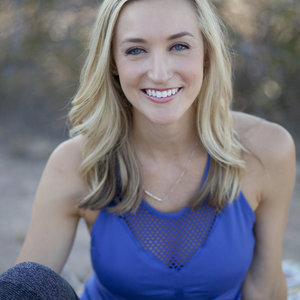 I did something I hate doing but it was kind of awesome and I think all of us need to start doing things we hate (just hear me out okay?) and here’s why.

Alright so here’s the deal...

Or at least I did.

I was always the athlete that could run fast short sprints as many times as you needed me to but ask me to run a mile and I’m out. Running was always a punishment in every sport I played and therefore it always held a bad connotation for me my entire life.

After college I would run a few miles here and there just to stay in shape but I truly dreaded it.

And then after having my first baby over 4 years ago I didn’t run ever again. Until a couple of weeks ago.

This past year has thrown many challenges at my family.  I had a 2nd baby and life got SUPER complicated (ever been there?) and being a person who has always been motivated by goals I have mostly felt like a failure over the past 9 months because well keeping my family afloat was more important than hitting big goals right now.

However, I accomplished a goal and I’m really freaking proud of myself!

It may seem small to most but on a whim I just decided I was going to run a 5k and I accomplished my goal! It’s something I’ve never done before.

Honestly, I was afraid to do it.

I know I don’t like running and I was afraid I wouldn’t be able to finish since I just started running again last week. But I just needed a challenge, I needed to try something new and I needed a goal to conquer.

Have you ever felt that way?

My only goal was to finish without stopping and I did it!

Running  this race was pretty amazing and challenging. I ran up hills and down narrow cobblestone roads but it reminded me a lot of life. We have ups and downs and bumps in the road but if we just press on we’ll hit the finish line.

Even cooler was being able to run with my sweet 4 year old in the kids run and seeing her excited to watch me finish the race was priceless!

So why am I telling you this? Why does this matter to you?

Not because I think it’s that awesome but because I learned something really valuable that I think will help you too.

I did something hard for ME, I took on a challenge, something I didn't like and I DID IT ANYWAY.

I stopped comparing myself to people who run marathons like it’s their day job or my girlfriends who can run 10 miles in a morning and started comparing MYSELF to well, myself.

I started thinking about how I can take my next step to make ME better and not try to compete with someone else’s chapter 10.

I didn’t sign up for the marathon, I started with the 5K.  I started small so I could prove to myself that I can do it, so I could develop confidence to get to the next step.  Baby steps right?

So here's what I want to say to you.

Wherever you are in life or in your fitness journey, don’t be afraid to start even if it sounds hard or it’s something you’ve previously disliked doing, or you’ve failed before, or even if it seems like a bad time.

It doesn’t matter how small it may seem to the rest of the world, run your own race and prove to YOURSELF you can do hard things. The sense of accomplishment you’ll feel when you finish is unlike anything else!

I don’t know if I’ll ever have the desire to run a marathon but I do think I may have just sparked a new love for running from my experience.

Go. Start. Stop being afraid of failure and DO IT ANYWAY.

When the RUSH is Over

Jackie is a mom of 2 little girls and a health + fitness coach. She helps moms new moms navigate postpartum life to become more balanced + healthy amidst the chaos through whole foods, flexible nutrition + home workouts. She has a passion for working with with breastfeeding moms to help them achieve weight loss goals while increasing milk supply. When she's not training her fellow mamas you can find her traveling, spending time with her girls or at her favorite Mexican restaurant :) She's currently living overseas in Lithuania while her husband pursues his pro-athletic career but their home base is Phoenix, AZ.

Everything you Need to Know About the Flu, the Flu Shot and Common Myths