Why We Make Memories 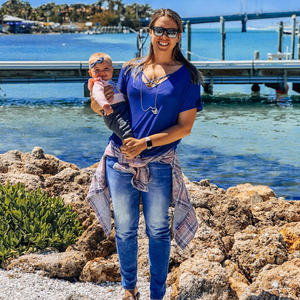 If you have followed along with my families adventures you know that we are big into traveling. Olivia is 11 months old and she has been to 5 states, 1 territory, and 3 countries. We have a cruise planned for the end of September and a trip to London in November.

Eric and I have always been travelers. We love to make memories and often when it is time to start planning our next "gift to give," that often means we start talking about our next vacation. We don't often buy the typical gifts and instead think of what experiences we can do together.

Lately, we have been jumping at the opportunity to travel and check items off our bucket list. I love that we are able to do this (and making it happen) but it also breaks my heart as to why we are working so hard to make those check marks.

In October, Eric and I got a phone call that no one ever wants to get. His dad called to tell us that his sister had a seizure. After being air lifted and multiple hospitals later it was determined that his sister, along with the seizure, had multiple strokes.

As Eric began to see just how quickly life can be taken away, his mentality and perspective on life quickly changed. Eric has always been the most positive person and very family oriented, but he was also looking towards later in life (saving for retirement or something special). Now he looks at the present and not the future - that isn't saying we blow all of our money on trips... we are still smart about it, but there is no telling how far in life we will make it.

Eric and I had been debating on going on another cruise. After a short visit with his sister last weekend, we were once again reminded about time and how precious it is, we decided to make the cruise happen. There have been so many ups and downs in this past year and as much as it has torn us apart, it has also brought us together.

So much has been lost in the last ten months. I feel as though I have lost my husbands side of the family. My sister-in-law is still very much recovering. She is now able to move her arms and shoulders but other parts of her body are still unable to be moved and she can't talk. As much as Annie is here with us, it hurts to know that Olivia will never truly know her aunt. At the same time, while Eric and I have taken this as a sign to live our life, other family members have done the opposite. We very rarely see Eric's parents. Understandably so they spend their time with their daughter who needs extra help. I see life from a new perspective now that I am a parent, I understand that they want to be with their daughter, but I also want them to know their granddaughter - which has been very difficult for them to do. As Annie continues to make the progress that we all hope for, I hope they can make progress at balancing life outside of watching Annie recover because as we all know, this life is too precious to not make memories.

Throughout this process of ups and downs, I have learned to be present, soak in those moments, and make memories. I hope you choose to make memories with the ones you love.

Break It Down! How to Help Your Teen w...

Hi there! I’m Chelsae - I’m a wife, first time mom, and dog mom. I’m a teacher turned stay-at-home-mom. I’m a born and raised Florida girl and have the constant itch for travel. I love sharing about our adventures as a family and my journey through parenthood.

Break It Down! How to Help Your Teen with ADHD Set Goals

Spreading Holiday Cheer with Your Kids, While Teaching Them about Gratitude